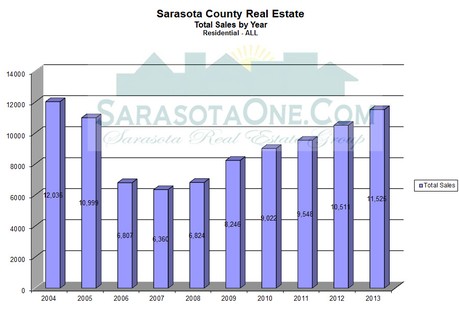 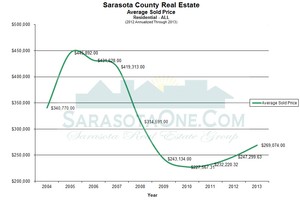 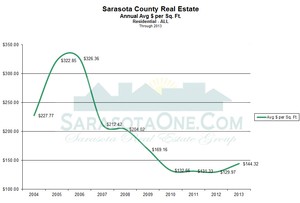 Overall Volume is Up

Total volume of sales was up 16% from $2.6 billion to $3.1 billion with several record sales were recorded in 2013 with Sarasota Real Estate Group having the second highest sale in Sarasota with the sale of 1452 Hillview Drive in Harbor Acres for $7,000,000 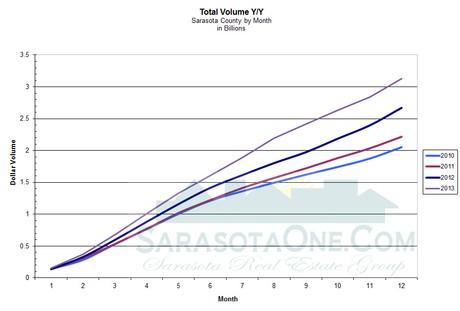 Looking forward we are seeing an increase in inventory in both foreclosures and non-bank homes.  We view this as a healthy situation.  Many sellers have put off selling until the market got better.  The initial bounce off the market bottom in pricing occurred in 2010.  Price increases came three years after unti sales began to turn. The influx of buyers that came into the market after approximately 50% drop in price caused shortages and pricing spikes.  No real estate market can sustain 10-15% price increases year over year for very long.  In fact, doing so would create another bubble that no one wants to see.  We view the current market as healthy, appreciating at sustainable levels, and attractively priced at price levels 55% of what they were at the peak in 2005.

For bargain hunters, the days of making below market offers passed in 2010.  That doesn’t mean today’s prices don’t have room to increase.  What we see as key in any real estate market is stability.  While no one can predict future events, we have been fairly accurate calling the bottom in April 2012.  The modest increase in supply we have seen at the beginning of 2014 will cause prices to rise at a slower pace that should give comfort to the long term prospects for home ownership.  After all, even with the price increases over the past several years, we are off the peak prices at 45% less than the prices of 2005.

Join In the Discussion Here