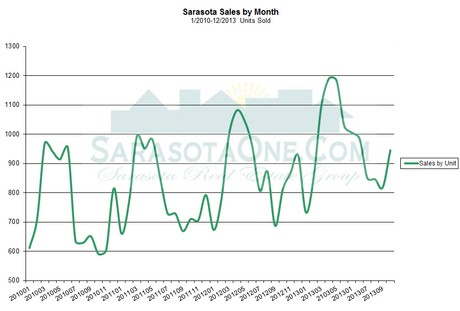 Sarasota Sales month over month continue to show a fairly consistent upward trend.  With the monthly dips and peaks, we see higher highs and higher lows.  The greatest numbers of closings usually occur in March/April based on our charts.  2013 is no different.  There were 738 sales in December of 2013 vs. 656 in 2012 representing a 12% increase. 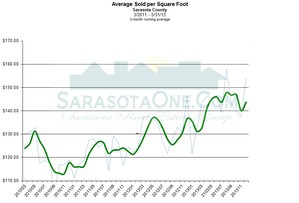 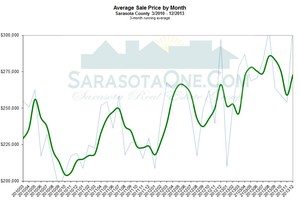 What we have noticed is the drop in closed short sales.  The “red” has defiantly shrunk as a percentage of total sales from past years.  Short sale situations wi 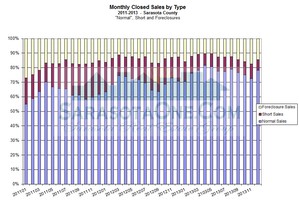 ll most likely continue to decrease as home owners have either refinanced into a HAMP or HARP program or the bank has successfully foreclosed on the home.  With the overall increase in non-bank involved properties, most buyers will be negotiating with a seller in a non-competitive situation.  We see the reduction in short sales combined with the increase in non-bank involved transaction as a continued sign of a healthy market that is getting stronger each month.

We saw another drop in foreclosure filings.  We believe our numbers accurate but the drop also coincided with a change in the reporting system by the clerk’s office in the 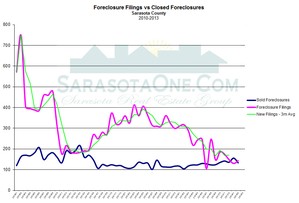 September time frame.  Sales of foreclosures still look pretty much unchanged as they have been.  The filings are still way down to 150 or so per month from where they were in 2010 when they were in the 600-700 range.  The number of foreclosure sales is fairly balanced.  One fact to bear in mind is that not all foreclosure filings result in a foreclosed property coming to market.  Many owners will resolve the foreclosure through a short sale or they will “get current” in some way through a loan modification or other means.  Also, the time period from filing to an REO home coming to market can be years.  We still suspect there are quite a few pending cases moving through the system but have no way to quantify how many.

It is always difficult to time a purchase decision.  In fact, looking a broad market statistics never reveal the state off supply and demand in a particular subdivision or building.  The obvious characteristics of this market show prices tend to spike in winter/spring months which makes sense.  In the vacation market, many sellers tend to be less flexible on their price especially if they are looking at solid rental income in the winter.  Many times, when the unit is empty in the summer, some sellers tend to be a little more flexible early in the summer or late spring.

The end of 2013 is showing the beginning of a seasonal spike similar to that of prior years.  A closed property will typically indicate that the contract was accepted 30-60 days prior to the closing.

The annual trend is showing up since 2010 with regard to price.  We also note that in annual terms, today's prices are roughly 55% of the average price for 2006.

Join In the Discussion Here