We indicated in April our belief the Sarasota real estate market had bottomed based on solid market numbers.  In our report of the “High 5” sales at the time, there was clear movement in the upper end which we feel has always be one of the leading indicators in the Sarasota Real Estate Market. This was further confirmed mid-year showing 2012 the third best year for sales in Sarasota over the past 10 years.  Now that eight months of sales have closed in 2012, we are prepared to offer projections for the remainder of the year. 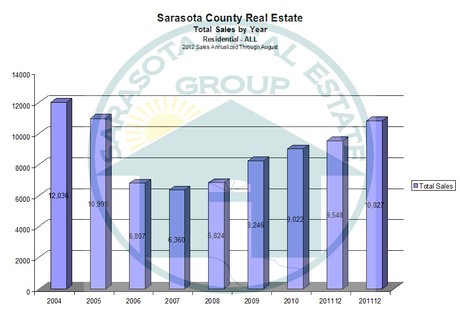 We project sales to come in at 10,927 total units which is a virtual tie with 2005.  Our only concern looking forward is a reduced inventory may hold this number down.  Inventories have remained around 4,000 total units for since the end of last season off from 6,000 units.  Simple supply and demand laws apply.   Higher prices may turn some people away but reduced inventory pushes prices higher.  Reduced inventory with increased demand tends to cap sales and push prices up.  This is a welcomed change for many as reduced demand with abundant inventory has pushed prices down in excess of 50%.  This is a trend that is finally at an end.

Right Now is the Bottom

While many buyers want to buy as low as possible, continued declines are not the time to jump in to a market.  We never advise to "catch a falling knife" as sound advice.  The smart buyer will want to see an upward trend and buy once the market has shown a clear bottom and an up trend.  We believe the market is showing that right now. Sales by units have made a steady increase since 2007 with falling prices through 2009.  Both the average price and price per square foot have increased three consecitive years. 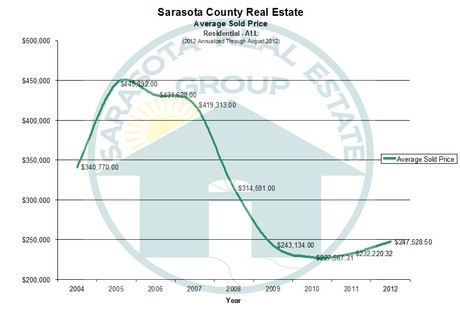 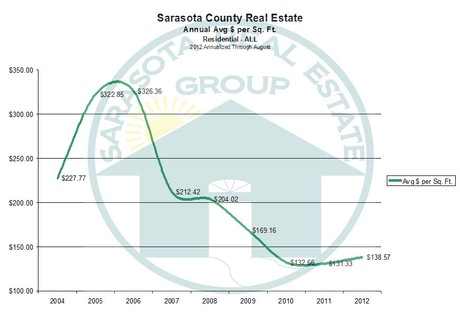 We are here to help guide you through the process of buying and selling real estate in the South Florida counties of Sarasota, Manatee, Charlotee, Pinellas and Hillsborough counties.  These numbers help give confidence toward market conditions and direction.  Just imagine, what we can do for you one-on-one!

**Disclaimer - 2012 numbers are projected based on numbers through August 2012 and rely on the assumption that all variable remain at the same levels through the end of 2012.  Actual year end numbers could be lower but they could also be higher.

That is great news for the Sarasota market. I love the fact that you include graphs and actual numbers and are not just giving the readers your "opinion". My market is seeing the same trends in Utah. As I talk to Realtors across the country most are saying the same thing. This is great news for our economy. Hopefully we can pull out of this mess.