Sarasota Sales in April Break Out

Sarasota, FL - Even the most pessimistic Sarasota real estate market observer would have to say that all the signals looking forward are green.  April 2012 succeeded in surpassing the total number of units sold, the average cost per square foot, and the average sales price for any single month over the past several years.  If a market bottom is what you’re looking for, you will most likely find it in your rearview mirror. 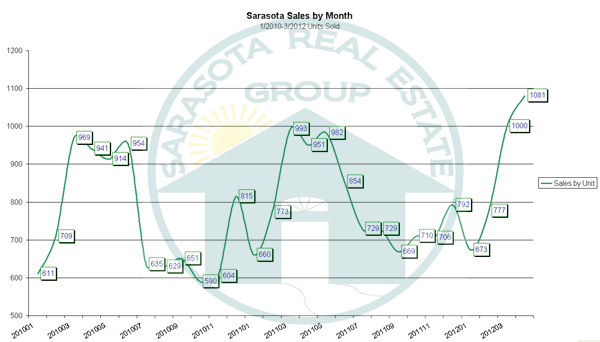 March 2012 eked out a record 1000 units sold but total sales for April leaped ahead by 8%  to a break out 1,081 total units.  Any serious analysis has to acknowledge this market is back on track.  The overall trend for the past two years has shown a market that peaked in the 900 to 950 range during the months of March through May.  For chart watchers, the slower months of July through November show that 2011’s lows were ahead of 2010 lows.  April definitively broke the trend to the upside with a strong three month surge.

This trend is also confirmed by looking at the rolling three month sales price average by month for the past two years.  A strong three month push to the upside broke the price ceilings of the past several years.  The average sale price in Sarasota County reached recent highs at  $258,591.  The other interesting correlation of this trend shows the slow or of months of September, October and November were much stronger in 2011 than 2010.  Higher loes and higher highs demonstrate market strength. 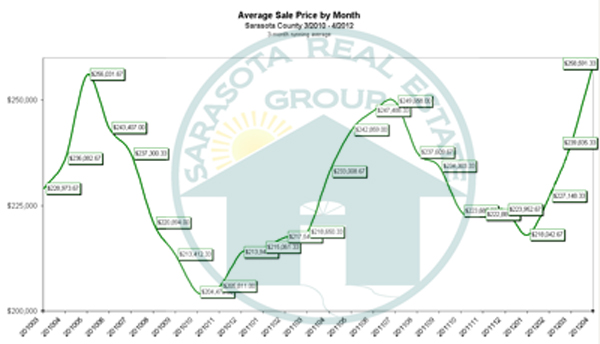 One last confirmation, and probably the most visual is taking a look at the average cost per square foot for Sarasota County.  The chart demonstrates higher lows during the slower months of 2011 as compared to 2010 with a significant upside breakout over the past three months to $138 per square foot. 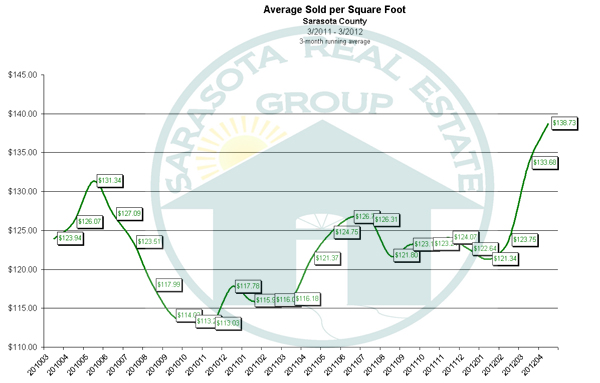 We don’t have a chart to show the difference between the cost of purchasing vs. renting a home. There have been several folks come to us stating (to the effect) a home purchase including taxes and insurance would cost $800-1000 per month vs. renting the same home for $1,500-1,800 per month.  This is another reason that if someone is looking for housing, purchasing is a much smarter choice than renting.  As the economy comes back and consumer confidence gains, overly tight lending standards will relax and more people will be able to obtain conventional financing.  We certainly hope it doesn’t go back to  2005’s nuttiness but most in the industry insiders acknowledge the pendulum has swung too far.

Foreclosure sales represent less than 5% of sold properties in the Sarasota real estate market. What we’re seeing in initial filings that the county clerk’s office is a slow upward trend of initial first time foreclosure filings.  Naturally you can expect banks are watching the market move upward as an opportunity to bring more foreclosures to market at higher sales prices.  While these filings are up and will take several years to come to market, their numbers are only 50% of what they were several years ago.  I suspect with the current interest rates and the scarcity of foreclosures in today’s market, additional foreclosures will be absorbed without any potential threat of pulling the market down.  Regardless of any projections it will take years for these foreclosures to enter into the market.  See the April 2012 Sarasota Foreclosure Report here.

We look forward to helping you find that perfect home.  Timing is always difficult but the signals are showing some rare clarity.  Don't ignore them and wish you have bought that Sarasota dream home.  We are here to help.